Donation to the National Library of papers

About 18 months ago I was approached by the Keeper of Manuscripts in the National Library Dr. Gerry Lyne with a proposal that they should buy “my papers” i.e. the records of my political and cultural life. I was very flattered and indicated that rather than selling them I would be happy to make them available to the State for nothing. We had a splendid occasion on December the 17th where four cases containing papers were put on display in the Rotunda and the Librarian of the National Library and former President and Senator Mary Robinson (who was my barrister in a number of significant legal cases) very graciously spoke. This little exhibition is still on view in the vestibule leading to the magnificent Yeats exhibition.

The papers cover three or four specific areas in particular. Firstly I suppose in the popular mind because it was so controversial I am identified with the emergence of the gay movement in Ireland as the founder of groups such as the Irish Gay Rights Movement, the National Gay Federation and the Campaign for Homosexual Law Reform. Materials related to all these organisations have been deposited as well legal papers from the various constitutional cases taken in the High Court and the Supreme Court and the European Court of Human Rights and a comprehensive archive of press cuttings.

The next area with which I am usually associated in the public mind is probably the preservation of Georgian Dublin and especially the work of the North Great Georges Street Preservation Society. In June 1979 I called a meeting of some neighbouring householders in my drawing room in number 18 North Great Georges Street and at that meeting a decision was taken to found the North Great Georges Street Preservation Society. I was elected chairman, a position I filled for the next 25 years. We conducted a survey of the street and from the information gathered put together a fairly complete list of all the houses, the date of their construction, the architects and stuccadores involved, the condition, the number of tenants, current use, current owner and availability on the market.

A modest but useful grant was made by the Heritage Trust (about 3,000 pounds in 1980). At my suggestion this was employed in staging a professionally mounted exhibition highlighting the problems and the potential of North Great Georges Street. An original copy of the accompanying booklet which I wrote in collaboration with our in house architect in the Society and long time neighbour in the street Tom Kiernan is included in the donation.

I have been directly or indirectly involved in the positive change of ownership of 12 out of the 48 houses in the street. Perhaps one of the most significant was the rescuing just before it was demolished of number 35 and the raising of funds to restore this important house as the James Joyce Cultural Centre. Inevitably (rather in the manner of Toad of Toad Hall) I was its first chairman and remained so for over a quarter of a century. My involvement with James Joyce and the popularising of Bloomsday in Dublin are also covered by a deposit of papers concerning among other things the three international Joyce Symposia which I chaired and of whose proceedings I was the co-Editor and other material (although quite a lot of the papers concerning the Joyce Symposia had already been donated together with my large library of Joyce scholarly books to form part of the library collection of the James Joyce Centre). 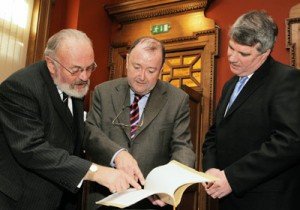 There is also material concerning my James Joyce one man show ‘Do You Hear What I Am Seeing’ which saw the light of day in its first form 30 years ago when it was performed in Trinity College Players Theatre as a two hander with the great Dublin folk singer Ronnie Drew. This has gone through various changes and luckily due to the vagaries of law I hold the copy right and so was able to continue to perform before during and after the confused Joyce periods of James Joyce copyright. Among the papers donated are some of the scripts of the show, early programmes and a very large collection of posters from various theatres and venues ranging from China, many of the European countries, the Middle East and Far East, both North and South America where this show has been performed. Its most recent outing was on the 25th of November to raise money for an Israeli/Palestinian peace initiative.

Finally there is material relevant to my work in the Senate where as one of the founders of the Foreign Affairs Committee with Michael D. Higgins TD I continue to play a significant role in this area. Also included are the records of some turbulent times in particular my battle with the late Sean Doherty when he was Cathaoirleach. This resulted in another court case where I was once more victoriously represented by Mary Robinson.